ATTYFLIN ESTATE, LIMERICK is among the Great Taste winners of 2019

Great Taste, the world’s most coveted food and drink awards, has announced its stars of 2019. Out of 12,772 products sent in from over 100 different countries, ATTYFLIN ESTATE, LIMERICK was awarded two X 2-star Great Taste awards, which means judges dubbed its Irish Rosette Apple Juice and Apple & Elderflower Infusion above and beyond delicious.

Judged by over 500 of the most demanding palates, belonging to food critics, chefs, cooks, restaurateurs, buyers, retailers and producers, as well as a whole host of food writers and journalists, Great Taste is widely acknowledged as the most respected food accreditation scheme for artisan and speciality food producers. As well as a badge of honour, the unmistakeable black and gold Great Taste label is a signpost to a wonderful tasting product, which has been discovered through hours and hours of blind tasting by hundreds of judges.

Recognised as a stamp of excellence among consumers and retailers alike,Great Taste values taste above all else, with no regard for branding and packaging. Whether it is vinegar, granola, bacon or cheese being judged, all products are removed from their wrapper, jar, box or bottle before being tasted. The judges then savour, confer and re-taste to decide which products are worthy of a 1-, 2- or 3-star award.

The panel of judges this year included; cook, writer and champion of sustainable food, Melissa Hemsley, chef and food writer, Gill Meller, as well as food buyers from Selfridges and Fortnum & Mason.

Be Social with Us! 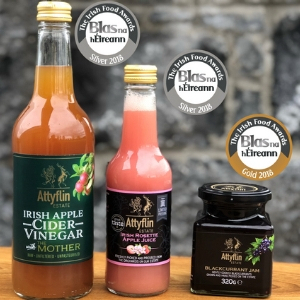 We are proud winners of a Gold Award, 2 Silver Awards, and a special award for the Best New Start-Up 2018.